skip to main | skip to sidebar

Its Raining in Port Charlotte...

The bottom of the 5th innings saw Matt Hall get hit by a pitch just as the rain started pouring down. I am not kidding when I say pouring either. The rain I saw on the way to the ball park did not compare to this down pour. At 8:11 with 2 outs in the home half of the 5th inning the rain delay began. Both teams have left to their clubhouses and the bulk of the crowd is gone. 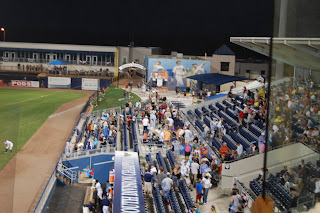 The ones left, who are shielded by an awning are cheering the grounds crew as they struggled with the tarp in the rain and wind. 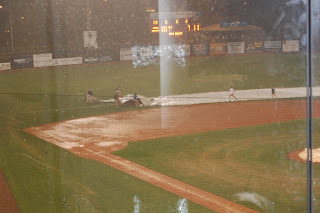 It took about 15 minutes, but the field is covered and the rain has slowed down a hair. I don't think we are playing any more baseball in Port Charlotte tonight. If the game is called we have just enough ball played to make this a Crabs win! 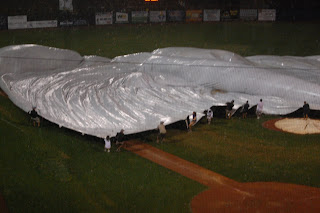 Give Frank De Los Santos his first win as a Stone Crab and give Matt Sweeney the game winning RBI. My MVP for the game is De Los Santos with a nod to Kang for his double. Really though the 22 year old lefthander De Los Santos was the story. He will get credit for a complete (4 inning) game if this is called and he will earn his first win of the season. He allowed 3 hits (but picked off 2 of them) and no runs. 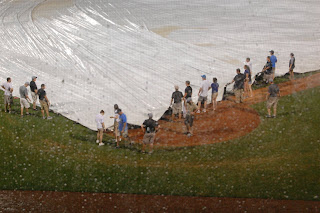 De Los Santos had the perfect pace, his good stuff and decent defense behind him. Mainly it was his economy of pitches that makes him my game MVP. 5 innings, 50 pitches and 37 strikes. Nice. As the rain has not slowed over the 25 minutes I am making the call myself. This game is over, my computer is closing. Stone Crabs win!!!
Posted by TBRaysNews at 5:18 PM 1 comment:

Pitching with the lead De Los Santos was no less effective. He sent down Paul Gran and Robert Taylor to open the inning before allowing a base hit to right fielder Isaac Galloway. With left fielder Hunter Mense (not to be confused with Hunter Pence) up at bat, De Los Santos picked off his second runner of the night to end the inning. Jupiter manager Ron Hassey took to the field for an arguement, but to no avail, inning over. Crabs still lead 1-0.
Posted by TBRaysNews at 5:07 PM No comments:

The Crabs Bats WAKE UP!

After another 1-2-3 inning from De Los Santos, left fielder Kyeong Kang led the bottom of the 4th for the Crabs. Kang was batting .318 coming into tonights game. 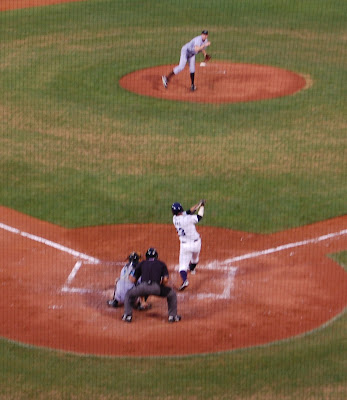 He gave the Crabs their first hit of the night when he deposited a ball about 320 feet into the left field corner for a stand up double. Henry Wrigley followed with a line drive single and wisely Kang was held up at third base. Designated hitter Matt Sweeney followed with a run scoring sacrifice fly to put the Crabs on the board. 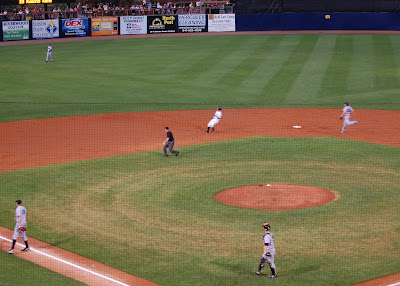 With Mike Sheridan batting Wrigley pulled off the delayed steal for his first stolen base of the year. Sheridan grounded out to end the inning stranding Wrigley at second. Thanks to the bats in the heart of the order the Crabs are leading this game 1-0 going into the fifth inning.
Posted by TBRaysNews at 4:55 PM No comments:

After getting two quick outs the number nine hitter, shortstop Emilio Ontiveros got the first (non infield) of the night for the 'Heads. This brings up centerfielder Kevin Mattison from the left side. Jupiter went with the hit and run, but Mattison was unable to put one in play. With Ontiveros still at first Mattison struck out swinging for out number 3. Through 3 innings De Los Santos has thrown 31 pitches-23 of them have been strikes.
De Los Santos spent last season with Bowling Green. He had a horrible record of 4-10, but kept a respectable ERA of 3.65 in 27 starts.
Onto the bottom of the third, score still locked at zero.
First baseman Mike Sheridan leads off the inning with his .059 batting average. Last season he paced Bowling Green with 14 homers, but has been less effective with Port Charlotte and is currently riding an 0-14 streak.
Sheridan led the inning with a walk. Right fielder Reid Fronk followed with a free pass of his own. Second baseman Matt Hall (batting .118) laid down a perfect bunt right in front of home plate. The Heads catcher fielded and threw out Hall at first. Runners advanced. Mission accomplished. This brings up leadoff batter Velasquez with two runners in scoring position and one out. Velasquez struck out swinging to bring Tim Beckham up for the second time. With men on second and third Beckham swung at the first pitch and grounded out 5-3. Inning over, no hits, no runs. Score still 0-0 after 3 full innings.
Posted by TBRaysNews at 4:33 PM No comments:

Frank De Los Santos sent the Hammerheads down in order quickly. In the bottom half 3rd baseman Henry Wrigley grounded out to his counterpart for the first out. Designated hitter Matt Sweeney hit a high pop up in front of the pitchers mound. The 'Heads first and third baseman nearly collided waiting for the ball to drop, but it did for out number two. Catcher Jake Jeffries lined out to left field for out number 3. Two innings in and the Crabs have yet to record a hit. This is one quick game thus far...
Onto the third inning...
Posted by TBRaysNews at 4:25 PM No comments:

The first pitch occured right on schedule. After an hour drive to beautiful Port Charlotte I made it to the Crabs Stadium. Through Venice I saw a lot of rain and got very nervous, but it is bright and sunny as can be. A perfect night and my view from the press box behind home plate is absolutely PERFECT. The top half of the inning was quick and painless. 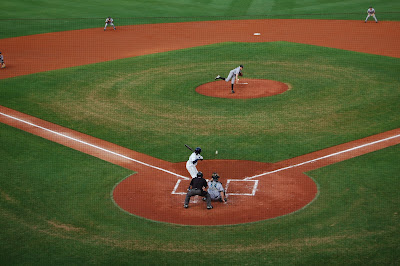 Starter Frank De Los Santos allowed one infield hit, but promptly picked the runner off 1-3. In the home half of the first, the Crabs went hitless. They didn't go completley without a whimper though. Lead-off batter Isaias Velasquez worked Hammerheads starter Graham Johnson inside and out, fouling off pitches left and right. He finally lined out to deep center field on the 11th pitch of the at-bat. Tim Beckham struck out swinging before Kyeong Kang grounded out to end the inning. Onto inning #2... Score tied up at ZERO.
Posted by TBRaysNews at 4:13 PM 1 comment:

Last night the Crabs fell to the Hammerheads of Jupiter 2-1 in extra innings. Tonight Frank De Los Santos will be on the mound for the Crabs againts those same Sharks. Ideally the Crabs bats will wake up and a new winning streak will begin. I will be posting inning by inning so check it out! Go Crabs!
Posted by TBRaysNews at 10:59 AM No comments: